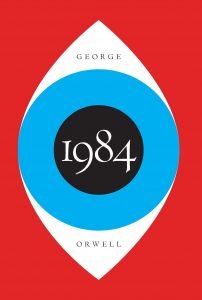 In 1984, one of modern literature’s most celebrated works, readers are introduced to Winston Smith, who lives in a dystopian society in which everything–from actions, movements, careers, and, even in some cases, thoughts–are monitored and recorded tirelessly. In this society, all individuals are governed by organisations who mandate conformity and allegiance, and who will cause perpetual retribution if found to be in breach of their strict–but overly arbitrary–laws and regulations. In the novel, Winston Smith–who is targeted with rewriting books in order to align with the actions of the omnipresent parties–falls in love with a woman named Julia. As their relationship is completely forbidden by the government, they employ a range of difficult-to-achieve tactics in order to maintain their hidden relationships away from the party’s eyes. This relationship sparks a sense of rebellion and non-conformity into Winston’s life, ultimately leading him to discover the true nature of the mysterious Ministry of Love, and discover the horrors of not only his senior societal managers but also lead him to question and consider his own judgement and ability to recall past events.

One can often judge a novel by how well it adheres itself to your memory after you complete it. For some, this allows the novel to transcend its source material and become part of greater meaning and movement in society. I have absolutely no doubt that George Orwell is the epitome of this statement, for a number of reasons. As a prolific reader, you will often read novels that have no real messages or morals at their crux, or read novels that have potential but never rise to their ultimate delivery. However, it is very rare in a reader’s life that you pick up a book that hits both of the aforementioned targets, and still has more impact and power to slap you across the face with. Undoubtedly, 1984 is the most thought-provoking novel I have ever completed, but it also manages to provoke feelings on top of it. While reading this novel, I came to the ultimate realisation that SO many of today’s popular young adult and adult novels (i.e., The Hunger Games, Divergent, The Handmaid’s Tale) all probably stemmed from the crucial ideology that Orwell initially was able to explore in one of his last novels. Any author can simply write a novel without as much depth and understanding, but when your novel manages to inspire and lay the foundations for a completely new genre, you KNOW you’ve written something that will stand the test of time. 1984 goes to show that, while a novel might not have beautiful, flowery writing, a perfect composition of literary devices, or deep and meaningful characters, it is the message it presents and the ideologies it conveys that truly result in a near-perfect novel.

This book left me with a lot of questions, but not the sorts of questions which I will regret never having answers to. I felt that Orwell did a splendid job of tying up the novel and closing in on his political commentary which aligned with popular beliefs from his time. Books like this should not end with cliffhangers, especially if they seem as though they will never warrant a sequel. Overall, I think Orwell did well in tying up all of the novel’s loose ends, but while simultaneously giving readers a chance to let their imaginations wonder about the future of Winston, Julia and the rest of the closely-governed society.

I only have one criticism for the novel as a whole, and that was the twenty-page saga of O’Brien’s book which readers are given about 200 pages in. I will not go into explicit detail about its meanings for the story as a whole, but I felt that it could’ve been omitted completely from the novel, and the plot itself would have no specific shortcomings in terms of concrete explanation. I found this part of the novel to be boring and bland and definitely felt that it stretched on for far too long. However, I am quite happy to ignore this minor issue based on the unwavering power of the rest of the novel.

CONSENSUS: Balancing the way between stellar writing and an unparalleled premise, 1984 cements itself as one of the greatest novels of our generation, while also adding enough thought-provoking elements of the story to leave readers wondering for days on end.