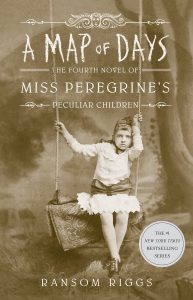 A Map of Days continues Ransom Rigg’s macabre and masterful Miss Peregrine’s Home for Peculiar Children book series, with the aforementioned novel being the fourth in the series. The novel follows our protagonist Jacob once again, who is sent on a murderous road trip in order to complete his late grandfather’s work and rescue a particular peculiar in need. Along his way, he, Emma, Bronwyn, Enoch and Millard all face terrifying clowns, mind-controlling diners as they learn the horrors of the American peculiar race and discover the true intentions of Abraham Portman’s work that he completed before he died. All the characters from the first three novels are revisited, including Miss Peregrine herself and Olive, Horace and Hugh, and the whole novel is full of twists, turns and surprises.

I read A Map of Days while travelling on a school bus to a school camp. I had caught wind of news that Ransom Riggs had planned to release the fifth book later this year (entitled ‘A Conference of the Birds’) and realised that I still had not completed this novel, and chose to revisit its 480 pages over the school break. The novel was nothing short of spectacular, and the cliffhanger at the end of the novel made my jaw drop to the floor. After book three (Library of Souls) had wrapped up, I had come to the conclusion that this book was Rigg’s swan song, and A Map of Days was certainly worth the three-year wait. The road trip that Jacob and his peculiars embark on matched mine in a similar way as I trekked up a mountain for Year 10 Ski Camp. I then ended up finishing the novel at 12 o’clock that night and lay awake for a long time after to let my mind wander about the novel’s future. The writing of A Map of Days was reminiscent of the first three novels, but being able to explore the American peculiar world–which is rife with the prominent 1960s air of prejudice and racism–was the cherry on top of this horror-flavoured dessert. Another great part about A Map of Days was its inclusion of colour within its photos. At first, I thought that this might take away from the novel’s charm, but it only seemed to add to the mood that this novel induced within me. For a long time, I was unable to find a series that truly shook me to the core after reading it, but A Map of Days has certainly but the Peculiar series up in the higher ranks. Altogether, the novel is fantastic. Readers may find its page number and font size a little bit of a struggle, but the solid story, fantastic characters and memorable anecdotes continue to impress and enthral me.