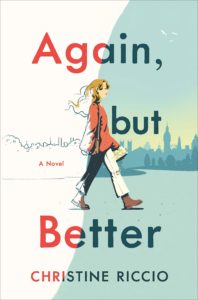 In ‘Again, but Better’, a college student and creatively-driven Shane enrols in a university in the United Kingdom to fulfil her dreams of becoming a writer. Previously a medical student at a university in America, she makes the move unbeknownst to her parents, who have insisted she pursue a career in medicine for vicarious reasons. Shane makes the move, and is soon swept up in the magic of London and is indoctrinated into a new group of friends. But when she meets Pilot–a guitar-playing, Beatles-loving college roommate, she thinks she’s finally found her place in the world. But as her parents discover her true academic intentions, and she discovers more about Pilot’s life, her niche corner of the world falls into disarray. It isn’t until she’s given a chance to redo everything that went well that the truth about her deepest desires comes to light.

As a book-lover, I seldom find a novel that keeps me thinking about it constantly. Again, but Better is everything and more for my acquired reading palette, and I can surely say that I devoured this 374-page novel in less than a day. I read late into the night, much to my homework’s disappointment, and I sat in awe of the ending for quite some time after reading the final line on the last page. For those who are unaware, Christine Riccio–Again, but Better’s author–is a YouTuber whose channel has amassed 400,000 subscribers. Christine, under the account ‘PolandBananasBooks’ exhibits a flamboyant demeanour and shares her love of all things bookish on her channel. Again, but Better, according to Riccio, is loosely based upon her own life, and I couldn’t help but notice the way that Shane reflects the Christine I have been watching for many years. Even without this backstory, Again, but Better serves everything a reader might want–hilarity, heart and a character who exhibits the quirky and introverted qualities that many heroes of popular novels seem to lack. Her funny one-liners, which are met with charming characters and a powerful punchy plot, create a seamless novel that leaves readers speechless. I cannot say enough good things about Riccio’s debut novel and know that it will forever sit upon my favourites shelf by my bed. I do not know how Riccio was instantly able to build a rapport between her characters and her readers, but I will forever be in awe of such a polished, refined and mesmerising first novel.