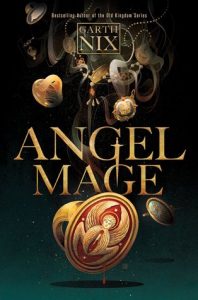 Angel Mage–written by Australian high fantasy laureate Garth Nix–introduces readers to the city of Ystara, a land in which angels, demons, musketeers and magicians all live among one another. Throughout the land, skilled individuals enchant and produce icons, which have the power to summon specific angels to aid with daily tasks and civil battles with other close lands in proximity. The novel–which draws many similarities to Alexander Dumas’s ‘The Three Musketeers’–tells the story of a woman named Liliath, who is resurrected from the dead to resume her post as a prolific summoner of powerful angelic entities. Liliath then enlists the help of four different people from the lands of Ystara to help in her quest to locate the Diamond Icons, which Liliath believes will have the power to resurrect the powerful angel Pallenial, who is one of Liliath’s old flames. After banding together with her four spearheads for the uncovering of the icons, her pawns quickly come to the realization that their appointments to this specific task are in no way coincidence, and that Liliath and her comrades may have a much darker plan in store for them and Ystara as a whole.

I will preface this review by saying that I had quite a few issues with this book: firstly, I felt as though I was in no way engaged in the plot–whether that is a testament to Nix’s writing or my frazzled post-exam mindset, I am unsure–but I felt as though nothing really happened in the middle section of the book. The beginning was intriguing; the end was less so, but still solid enough to warrant further reading, but I honestly felt as though pages 200-400 could’ve been completely omitted from the entire novel, and it would pose no problems to the development of the plot. Honestly, the only parts of the novel that achieved significant mental retention for me were the actual quest in the last forty pages of the novel and the expositional one hundred pages in the beginning, in which the entire world was set up for the readers.

Furthermore, another issue I had with this book was the overuse of complicated naming of places/people/things. Every time Nix tried to indicate the name of a building, or specific angel, or something along those lines, I only felt the entire novel slowly continue to grow more convoluted. After a while, I would lose track of the names of certain places within Ystara, or the names of angels and what their powers specialised in. I understand that this is a common issue for many fantasy authors (i.e., Game of Thrones series, Mistborn Trilogy, Inheritance Cycle), but to remedy this, many authors of fantasy novels will insert a glossary of characters’ names and place names at the end of the novel for the reader’s best interest. Nix did not do this, and it was only to his own detriment. This novel does not seem to be targeted to young adults exclusively, meaning that Nix may possibly have middle-grade students reading Angel Mage. The lack of glossary is therefore only losing his sales for the future, as younger readers may not be able to completely keep up with the names of certain characters and places.

Overall, I felt as though this novel was rather bland in all of its forms, first and foremost when referring to the writing. I understand that fantasy novels are not always the most well-written because of their literary content, but Nix really fell flat here for me too. This is probably a contributing factor as to why it took me three weeks to read this. As an avid reader, I have read many a novel in which the plot and concepts are spectacular, but are completely overshadowed by writing that is either too flowery (yes, I am looking at you, Oscar Wilde) or too bland; for Nix, it is most certainly the latter. The characters seemed rather one-dimensional to me, and I was not invested in the villain as a whole. I have not read any other Garth Nix books before, but I pray that any reads of his that I dive into will not be as shallow as ‘Angel Mage’.