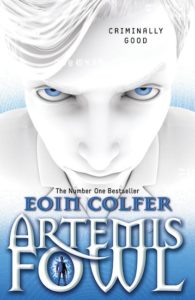 Eoin Colfer’s bestselling middle-grade adventure mystery novels chronicle the lives of twelve-year-old Artemis Fowl. In the first Artemis Fowl novel, we meet our eponymous character, who is more devious and clever than most adults. The novel follows Fowl after he attempts to catch a fairy in order to obtain gold for ransom. His main motive for this is that the fairy gold will be able to restore the fortune of his esteemed family after the disappearance of his father. Artemis successfully manages to capture a fairy, but he is sorely challenged when the fairy launches an attack on Artemis, his friends and his own family house. The fairy deploys an army of goblins, trolls and other fairies to conduct a major siege.

To preface, I will say that I did not enjoy this novel. I feel as though I, as an adolescent reader, have completely moved past the demographic that this novel was intended for. The characters in the novel were few, and there was rarely any development, which is a necessary component of all storytelling, no matter what your intended reading audience actually is.

Artemis is a thoroughly dislikable protagonist–he can be mean, hedonistic and rarely displays any virtues that other protagonists from children’s books seem to have. I understand that no hero is perfect, but by failing to discuss or reveal why this is, the titular character of this novel falls completely flat on his face. I also felt no attachment to any of the other characters in the novel, as I felt they were too shallow and not developed enough over the 277 pages.

Another problem that I had with the novel was its inclusion of fairy characters. The problem I had with this was that the fairy world–which lives under ours–was too different from the real world to be believable. It made no sense that there were fairies and other magical creatures in a seemingly normal story, and while novel such as Cassandra Clare’s The Mortal Instruments is able to develop an interesting and intriguing contrast between these two worlds, Colfer fails once again.

Overall, this novel was a weak start to the story. I expected adventure, jokes and heart, but I was sorely disappointed. This novel, in my opinion, is better suited for children in primary school, and readers who are older and more prolific in their literary skills will find Eoin Colfer’s novel a bore.