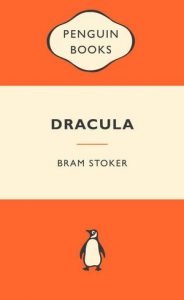 Bram Stoker’s Dracula, which has been deemed by both critics and the general public as a staple in both horror and gothic literature, readers are introduced to Jonathan Harker, who travels to the region of Transylvania to meet with Count Dracula in order to assist him in his real estate affairs. It is not long, however, until Harker realises that he is being held captive in the castle, and also learns that Count Dracula is a vampire. After narrowingly escaping the castle, Harker begins to discover that Dracula has stowed away fifty boxes of earth on a ship that is wrecked at sea in order to ensure that he has a place to rest. Along the way, Harker, his wife and his friends all face several different tasks and trials in order to bring down Count Dracula and prevent him from using his bloodlust against innocent people, as well as avenge the deaths of all of whom he has killed.

I had numerous issues with this novel, one of the most prominent being the writing. Honestly, this novel was too full of long and arbitrary monologues on topics with which had seemingly no correlation to the novel itself. Not only did this annoy me, but it also seemed to add considerably to the length of the novel as a whole. One of the major issues that I often have with novels is how the story seems to let itself down in the middle, thus eradicating what would usually be a solid beginning and end. Stoker definitely fell flat in this regard–I truly felt as though none of the novel’s middle portion seemed to have any concrete meaning for me, which was very disappointing.

One of the other more major issues that I had with this novel was the characters. When you use a character as the title of your novel, it is probably a good idea to focus mainly on that character itself, rather than that character in relation to others. Throughout the novel, the titular character is barely even properly included in the story–he has no lines after the first few chapters, we never really get a look into his life and history, and we never learn the origins of his vampiric affliction. Going into the novel, I assumed that Dracula would be given more of the spotlight in this novel, but all readers were really given was Dracula being discussed by others. This novel set the tone for a generation of vampire films, books and television shows, but I have to say that this novel would easily be overshadowed by other iterations of the vampire story than their original source material.

Another issue I have with this novel is all of the characters, mainly that NONE of them were in any way interesting, and instead were tasteless and one-dimensional. If you had asked me to distinguish between Van Helsing, Doctor Seward and Harker, I honestly would struggle to disambiguate them from one another, because they all felt as though they blended together too easily, which did not allow the characters to fully reach their potential.

Altogether, this novel was a let down; I wanted action, horror and gothic stories, but all I got was a washed-out and verbose combination of bland writing and–for the most part–boring plot.