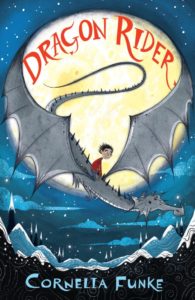 DRAGON RIDER follows the tale of Firedrake, a young dragon who sets off on a quest to find the acclaimed Rim of Heaven after learning that his home–and all the dragons that live in it–are in grave danger of a man-induced flood that will destroy their riparian home. Along the way, he will be joined by London orphan Ben and Sorrel the brownie on this journey, but must make haste, as Nettlebrand–a monster with the intention of dragon murder–and his trusted assistant Twigleg are hot on their trail. Firedrake, Ben and Sorrel will meet basilisks, dwarves, monks and many other characters in their quest to avenge all silver dragons.

FUNKE DELIVERS a satisfactory fantasy novel in DRAGON RIDER, and while her later works on the Inkworld Trilogy (Inkheart, Inkspell, Inkdeath) truly made her a staple among middle-grade fantasy fiction, there is no doubt that Funke has found her niche in the world of novel writing. With charmingly-described descriptions of nature and a lovable bond between human and dragon, DRAGON RIDER will truly mark itself among one of my favourite novels of 2018.

THE IMAGES sprinkled throughout the novel only added greatly to its success as a children’s book, with a perfect blend of fantasy and friendship, DRAGON RIDER has certainly solidified Funke’s writing, as she perfectly weaves characters, descriptions and plots together to create a fantastic novel.

I WAS eager to pick up this book when I saw it on the shelves in Squishy Minnie, as I am a dragon lover who has spent many a day poring over Christopher Paolini’s ERAGON, and I will say that DRAGON RIDER failed to fully show itself as a fantasy novel, as I felt as though it could be set today when considering the descriptions given of London in the first few chapters. ERAGON succeeded in capturing me in a world that is entirely different to the one I experience on a daily basis.

Aside from this, I truly did enjoy DRAGON RIDER.