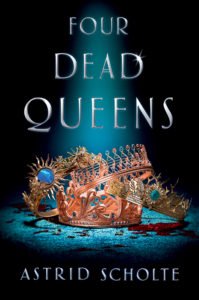 Astrid Sholte’s novel combines urban fantasy and murder mystery in a setting that echoes the popular dystopian-style factions of young adult fiction, but with enough unique elements to make it stand out. The world of Four Dead Queens is reminiscent of fantasy, but instead of magic, there is strange and interesting technology that serves as the catalyst for the story.

The descriptions of each of the four quadrants and their inhabitants create an exciting world that is easy to picture yourself in, and the politics and history of that world make it breathe. The ambiguity of the time it’s set in makes it seem a little anachronistic and confusing, but once you settle into the world it becomes a space you want to explore further. The individual values of each quadrant and how they interact with each other make for fascinating conflict. Nature versus technology and emotion versus logic are explored, along with the idea that you can’t have one without the other.

Scholte handles the structure of the novel beautifully. While the shifting perspectives mean that some characters don’t get the development they deserve, the fast pace keeps the reader speeding through the novel and trying to reconcile what they already know with what’s happening on the page. Just when the mystery seems to be falling into a pattern, Scholte will drop in something to stir up the formula and keep the reader guessing. Four Dead Queens challenges the reader’s perspective through the lens of not one, but multiple unreliable narrators.

For a book with a title that seems to give so much away, Four Dead Queens is nothing you expect. The novel plays with the expectations of the readers as well as the expectations of the world it is set in to create compelling characters and an intriguing plot. While the plot relies on a lot of popular tropes, it avoids being predictable by utilising the details of its worldbuilding. With such a decadent setting, Four Dead Queens is a mystery that will leave you wanting more.