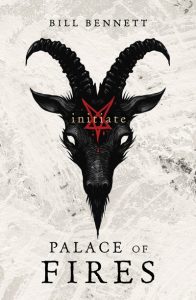 Acclaimed writer Bill Bennett unearths a new satisfyingly dark and entertaining series in ‘Palace of Fires’. The debut novel in the series–‘Initiate’–follows the story of Lily Lennox, a teenage girl living with her single mother on a farm on the outskirts of San Francisco, California. Lily’s seemingly normal and idyllic life, however, is thrown into complete disarray when she comes into contact with a trio of dark, menacing, shape-shifting witches with a very malicious agenda–to capture both her and her mother as offerings for a Satanic ritual performed by their magical organisation known as Baphomet. This encounter then thrusts Lily into a world of witch huntings, murder and danger as she tries to relocate her missing mother, all the while unearthing truths about her family’s unpaid magical debts, her mother’s origins and life story, and–most importantly–how she plays into the prevention of the demolition of her family’s heritage and her future as an inducted ‘white witch’.

This novel was an absolutely satisfying and eerie read from beginning to end. As an unwavering fanatic for horror literature and films–from ‘Carrie’ and ‘It’ to ‘Get Out’ and ‘The Conjuring’–I am always sceptical of an author’s appeal towards horror. I will say with no doubt that horror is a genre that is incredibly difficult to write, convey and to master, and it is very rare for a writer to hit every curve ball on their debut novels, especially when compartmentalising them into a genre that is certainly not quite as prolific as others in comparison. However, I can say that ‘Initiate’ did not fall flat on any terms whatsoever: the pacing felt solid, the characters were both believable and balanced, and Bennett aptly managed to traverse the precipitous horror-literature tightrope between gore that is too-intense and fearfulness that feels insipid and washed-out. Throughout the novel, I sensed a very deep connection between the words on the page and the visual image in my mind, without any specific roadblocks between the thoroughfares. Bennett manages to ground ‘Initiate’ in a world that mimics our own–especially in the novel’s first few chapters, in which Lily and her mother visit a farmer’s market not dissimilar to the monthly farmer’s market in Kyneton’s St. Paul’s Park. But where the magic that lies in horror really comes into fruition is when the reader feels like their events could be happening right out their front door, in the next street across, right beneath them without their knowledge. At the crux of it, this is what–in my opinion–makes horror such a masterful genre, and Bennett perfectly manages to cement ‘Initiate’ into the simultaneous categories of ‘believably grounded and realistic’ and ‘whimsical, magical and enigmatic’, all while maintaining a seamless weaving of writing, dialogue and pacing.

I also really commend Bennett on his plot structure in ‘Initiate’. When analysing the blurb before purchasing this novel, I noted about how the blurb gave meagre information about the plot, offering just enough to sate a book-buyer’s compulsive literary spending and tip them over into making their way to the counter. However, the one thing that I will say for Bennett’s writing is how he cleverly wove in other subplots and character arcs, while never truly shying away from the central elements and themes. Sometimes, when a writer tries too hard to introduce too many side stories into their work, it only makes the plot more convoluted as a whole, and what may seem like a way to offer more plot and information to go off in later novels may simply end up being overcrowded, polluting the reader from focusing on the essential parts of the story. Bennett was able to cleverly deflect from this common mistake made by debut authors by managing to intertwine all the characters into one central goal–to find Lily and to complete the task of the magical organisation. Even though all of the characters in the novel have different motives and agendas, they all end up on the same trajectory; this manages to keep the story from overindulging in too many side stories, and instead reins in the recurring cast members to ensure their focus remains unanimous, allowing for more divergences of purpose as the novels in the series continue to be written.

Ultimately, this novel was a deeply satisfying tale, incorporating old and new tropes to convey a solid story with plenty of fuel for sequels. The novel ended with a cliffhanger, ensuring that readers stay enticed into purchasing the sophomore book of the series (‘Unholy’ is its title; look for it on shelves where books are sold), but while also ensuring that some things are wrapped up nicely. I cannot wait to continue this series, and recommend the novel for those who enjoy a combination of fantasy, horror and adventure, served up with enough wit and wonder to excite readers and keep them on their toes.