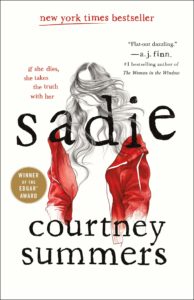 Courtney Summers’ well-written murder mystery is a modern take on the genre. Following the sister of a missing girl and the journalist trying to find her, Sadie’s format is unique, if a little confusing at times. The chapters written from Sadie’s perspective are in first person, but every second chapter is written as a script for a podcast. While this choice shows the narrative in the broader context of all the young girls that go missing in the world, in this novel the podcast chapters detract from the main narrative. With the title Sadie, the reader expects the book to focus on the girl, not on the reluctant reporter assigned to her case. The change in format can be jarring, and it makes the reader wonder if whether the narrative would have worked better asan actual podcast.

However, the two perspectives create a sense of urgency and further mystery as the reader waits for them to finally intersect or at least catch up with each other. The journalist is always one step behind Sadie, but he also knows things that she doesn’t, which quickens the pace of the plot as it develops. Summers carefully chooses what information each character knows, complete with lies and misunderstandings, so that the puzzle comes together slowly and reveals more mysteries as it goes.

Sadie is a unique protagonist in that she has a stutter, a trait that is usually used to show a timid or weak character. Sadie is far from this, and her stutter is portrayed with accuracy and depth, detailing how it impacts her everyday life. While Sadie’s physical voice is an obstacle for her, her internal voice as a narrator is powerful and strong. What makes Sadie such a compelling narrative is the use of two uniquely unreliable narrators.

Sadie knows the most about her sister, the girl who went missing, but she is young and was kept in the dark about a lot of things. On top of this, she is biased in who she believes is responsible and is single-minded in seeking revenge. The journalist, despite his investigative skills, is limited by what his interviewees are willing to tell him. These two conflicting storylines make for a thrilling and exciting mystery.