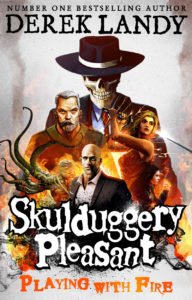 Skulduggery Pleasant – Playing with Fire is the second novel in Derek Landy’s Skulduggery Pleasant series. Following on from the events of the first novel (if you have not read the first novel, or do not want spoilers, please STOP reading right now), the novel picks up a few months after Skulduggery and Valkyrie defeated Nefarian Serpine in the battle at the Sanctuary. Stephenie Edgely has now fully adopted her new persona as Valkyrie Cain and is training hard to perfect her skills in elemental magic. However, three powerful mages disturb the peace of this magic world when they attempt to rebirth the Grotesquery, a monster that will be able to open a portal which will usher in long undead gods known ominously as ‘the Faceless Ones.’ So, once again, by teaming up with a ragtag bunch of magicians and fighters–most notably Tanith Low, China Sorrows and Mr Bliss, Valkyrie and Skulduggery battle to prevent the resurrection of said gods on the lunar eclipse.

Having read the first five Skulduggery Pleasant books, I was drawn back to this particular book in the series in my attempt to re-read some of the series before the release of the twelfth book ‘Bedlam’ during 2019, and I can without a doubt say that this was a comforting, hilarious and action-packed re-read. Skulduggery and Valkyrie have an incredibly laugh-out-loud dialogue and friendship with one another, but one of the things that really stood out to me during this re-read was the fierce dichotomy between this and the violent side of the novel. One moment, Skulduggery could be delivering a humorous, wise-cracking anecdote, and next moment, a character’s limbs are completely torn off. There is a significant increase in the violence levels in this book in comparison to the first novel in this series, and definitely takes a step in a darker direction, a direction that is only pursued in later books.

I also found myself intrigued by new characters we were introduced to in Playing With Fire, my two favourites being Springheeled Jack–who is quite evidently created with the idea of London’s Jack the Ripper in mind–and Varien Scapegrace–who is quite evidently a complete laughingstock of the whole novel. We were able to develop the characters a lot more in this novel, too–we were given a backstory to China Sorrows and learned more about the Faceless Ones, who come into play in the third book. I was glad that these characters were given more information, as that is what I feel sequels should do aside from bringing in paychecks.

All in all, I feel as though I could talk for five hours about this novel. It was a complete success, and I enjoyed every moment of it. Skulduggery is hilarious, Valkyrie is completely strong in both a physical and mental sense, and the perfect combination of humour, heart and horror cements Playing With Fire as my favourite Skulduggery Pleasant novel to date.