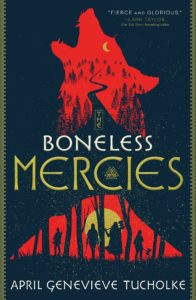 April Genevieve Tucholke’s high fantasy novel, The Boneless Mercies, sweeps the reader into a deeply evocative world that grants a feminist take on classic tales inspired by Norse mythology. A retelling of Beowulf, the story follows a band of young women called the Boneless Mercies as they abandon the life they knew and travel the land in search of heroism.

Tucholke’s writing is poetic and haunting, a callback to the epic poems of old. The setting is an echo of Scandinavia, but with enough subtle differences to make it a world of its own. The geography and politics in the world are solidly established, with distinct factions and cultures that breath life into the setting. Witches live secluded by the sea, archers run wild in the woods, and Mercies kill quickly and painlessly to end suffering.

Tucholke explores the role of women in the fantasy genre, acknowledging the passive roles female characters have historically played while not getting caught up in the sexism of the world, making the novel a tale of victory and rising above expectations. The Mercies use the skills they learn in their typically female-dominated work to help them defeat their challenges in a way only they could. Tucholke gives us protagonists to cheer for, characters who have to work for their goals not only physically, but by putting aside the perceptions others have of them. Reversing the gender roles present in Beowulf adds a layer of complexity to the age-old story that gives the protagonists someone else to fight for.

The Boneless Mercies is rich with tantalizing description and poetic prose, but what really breathes life into it is the characters. Each has a different place in the world, from a homesick sea witch to an aspiring archer, and their own long-term goals. The Mercies are all distinct from one another, yet they work well as an ensemble cast. The bonds between them are the heart of the novel, their relationships and conflicts the force that pushes the story along. The Boneless Mercies is a wonderful homage to the fantasy genre that gives everything that classic epic tales have to offer, along with a much-needed new perspective and a compassionate core.