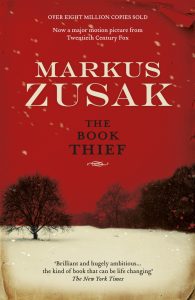 Marcus Zusak’s captivating debut novel follows the story of Liesel, who witnesses the death of her younger brother while on a train through Germany. When she discovers a novel hidden in the snow while standing by her brother’s grave, Liesel pockets it, despite the fact that she has not acquired the ability to read. When Liesel is taken to a foster family on Himmel Street, she soon settles into a life that is pleasurable but riddled with destitution. However, the stakes are raised exponentially when news of the impending war and Hitler’s impact upon Germany and the Jewish race reach Liesel and her foster family, and this poses a significant threat to the family because they take on a Jewish soldier and hide them in their house as an honour to an old friend. Soon, Liesel, her family and her friends on Himmel Street are thrust into the trials and tribulations that only war can bring, witnessing carnage and horror, but ultimately creating memories that sustain them through the hardships of Nazi Germany.
I will preface this review by saying that I do not usually enjoy war stories, especially those targeted at young adults and children. I often find that stories of this nature are either too bleak to see all the way through (i.e., The Boy in the Striped Pyjamas) or completely gloss over the impacts of war completely. Very rarely in my reading life have I found a book that reaches a perfect equilibrium between these two extremes, but I have no doubt that The Book Thief managed to not only achieve this equilibrium but transcend it in a way that I can barely even describe. One of the reasons as to why this novel managed to hit all the aforementioned targets was its crucial story. I found that by allowing readers to explore Liesel’s romance with words, readers are offered a substantial reprieve from the war-focused story, giving us tastes of the carnage, but deflecting masterfully with other central plot points, including the relationships between the children on Himmel Street, the tense relationship that Liesel shares with her foster mother or Liesel’s infatuation with words and stories. By doing this, Zusak is able to create a happy medium between a dark, tormented horror story, and the exploration of youth and Liesel’s coming-of-age narrative. By doing this, Zusack ensures that ‘The Book Thief’ transcends one specific genre, subsequently giving readers who value different styles of reading a taste from every angle of a novel.

I can’t review this novel without speaking about the narrator. When reading novels, I often prefer first-person over third-person, because I feel as though it gives a greater insight into the central character. When opening this book, and learning quickly that Liesel was not the narrator, I was taken aback, unsure as to how connected I would feel to the protagonist’s rise and fall in Nazi Germany without being able to hear it from her directly. However, after about thirty pages, I realised that having Death as the narrator only increased my appreciation for the novel ten times over. Never in my reading life have I read a novel that is narrated by a character not actually centred in the plot, and I have to say that this was an ultimately pleasant surprise. Death gave the novel a sincere insight into the impact that war has upon society, allowing readers a glimpse into the horrors that war can tear apart men, women and children. One of the hallmarks of an excellent novel is how it makes a reader ponder a certain topic, and I can certainly say that not only did Zusak comment on the inadequate divergence between social classes and demographics, but also was able to give voice to something that–in our lives–will never be given a chance to speak, much like the oppressed individuals who were silenced under Adolf Hitler’s reign.

Altogether, this was one of the most wholesome and impactful novels I have ever had the pleasure of reading. Hitting all the right notes on a novel is something all authors hope for, and rarely does an author hit every single stride on their first attempt. This novel was moving right until its very end and certainly kept me up past my bedtime mulling over its themes and messages.