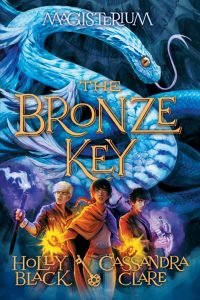 The Bronze Key is the third instalment in the Magisterium series. Picking up a year after book three (The Copper Gauntlet), Callum and his best friends are now entering the third year of their magical training. Callum has now revealed the truth about his soul to his close friends, as well as his frenemy Jasper and his own father, but is still struggling to maintain his anonymity. However, when a Gold Year student is found murdered, Call becomes aware that there may be an extremely dangerous saboteur in his midst.

This novel is my favourite of the series to date. Not only did we see spectacular breakthroughs in character development, but we also were given a diverting sense of mystery for the entire duration of the novel. This novel kept me constantly on my toes, and I managed to finish the novel in just under three hours. One of the hallmarks of a good mystery novel is having a wide range of possible subjects for the specific crime–which was, in this case, murder–but then completely shocking the audience when the true criminal is eventually revealed. I actually had to put the book down for a few moments just to process what was going on in the story, only to ravenously hang onto the last few pages.

All in all, I have nothing bad to say about this book–the characters are great, the story was equally entertaining and poignant, and I can’t wait for more.