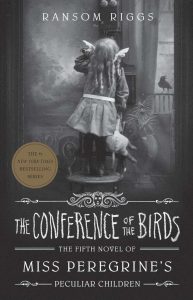 The Conference of the Birds offers readers with a fifth dive into Ransom Rigg’s world of the much-adored literary peculiars. In this novel, which carries on directly from ‘A Map of Days’–released as the fourth book in 2019–Jacob and his peculiar friends return to uncover the mystery surrounding their newest companion Noor, most namely piecing together the elusive lore that surrounds her and a prophecy that threatens to wreak havoc on both the normal world and the peculiar world as Jacob and his friends know it. As the novel progresses, Jacob and his friends follow leads to uncover several essential items needed to prevent the resurgence of Miss Peregrine’s ill-fated sibling. This ultimately leads the peculiar cohort on a loop-jumping journey which spans several timelines, bringing new characters to light, while also reuniting one with the abnormal party.

I will preface this review by saying: while I did enjoy reading this novel, that–in no way–makes it a perfect read. As a ravenous horror connoisseur, I have always tried to maintain completely impartial towards this book series–but I just can never let go of how exquisitely it weaves together a medley of great characters and plot, while still managing to bring something new to the table. However, this novel was a little bit of a disappointment to me, especially when I subconsciously place this series on a literary pedestal; I ultimately found that it didn’t properly live up to its predecessors, most namely ‘A Map of Days’–my favourite novel of the quintet. This novel was intricate to a fault, and while it is sometimes possible for novels to manage this component of storytelling well, ‘The Conference of the Birds’ definitely lacked a cohesiveness that I have always typecasted Riggs for. Rather than have the photographic elements of the novel be complementary to the plot–which is one of the reasons why I feel that the novel it such a driving force in the world of publishing–I honestly felt as though the images laced throughout the pages were not totally coherent with the plot.

If I was trying to explain this novel to a friend, I would have a lot of trouble trying to convey all that was happening throughout; it seemed as though the plot was moving in a systematic form, but would then divert off into a subplot that never fully came to fruition. This led to a sense of detachment from the characters and the plot, ultimately causing significant issues for my overall enjoyment. This novel also diverted into far too many different peculiar loops. Readers who are familiar with this series will always remember the plights of the Devil’s Acre and the inaugural Cairnholm loop from the first novel, but by adding in so many different loops, time settings and characters–all while failing to employ proper development–led to even more detachment from the plot, progressing the narrative from fast-[aced and interesting to drab and stagnant.

All in all, this book was a disappointment. I can certainly say that when I finished ‘A Map of Days’ last year, I had been counting down the days until the release of book five. I expected a lot more from one of my favourite series, but if Book 6 is on its way, I truly hope that Riggs can progress his narrative in a more cohesive sense in order to achieve a harmonious balance between plot intrigue and proper pacing.