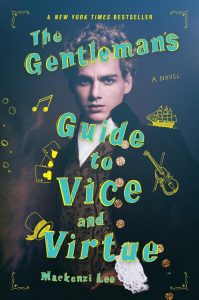 The trials and tribulations of an English upper class noble are thrown into increasingly dangerous–but equally hilarious–lengths in American author Mackenzi Lee’s novel ‘The Gentleman’s Guide to Vice and Virtue’. The story centres around Lord Henry Montague as his affluent father sends him away on a Grand Tour throughout Europe with his sister and close friend Percy, with hopes that Henry will manage to sober up and pull his weight before beginning work in his father’s ranks. However, when Monty unknowingly purloins a mysterious artefact, he, his sister and Percy–with whom he shares a budding romance–end up on a whirlwind adventure throughout Europe in their attempt to recover the item after learning its significant power.

This novel was absolutely nothing short of spectacular. I have to admit that historical fiction is certainly not a genre I am familiar with and actually ranks among one of my least favourite genres of literature. However, Lee manages to remedy this genre prejudice in me by delivering readers with equal parts romance and adventure to combat its setting in the genre, ultimately branding the novel with a unique flair and intrigue that no other book truly has managed to attain. The richness with which Lee writes perfectly manages to paint our protagonist as equally flawed as he is likeable, which I feel is a talent that is sometimes is not properly executed by authors of young adult novels. But Lee paints a narrative so vividly in her writing that there is absolutely no lull in the pacing or plot (a feat that many a young adult book has failed to achieve). By containing the main trio as the only characters who move throughout each part of the story, Lee is able to insidiously develop their character arcs over time, rather than trying too hard to maintain the narrative development of a wide-reaching cast. This is only a testament to an incredible writer, one who is aware of their characters in a way that other authors may not always be.

The romance in this novel was another component of the narrative that I really enjoyed. Over time, several mediums have approached LGBT+ relationships and characters with the intent of their gender/sexuality being their character’s driving force, and even though the narrative of these characters is continuing to evolve over time, there are still some roadblocks in these character’s developments. However, Lee manages to properly convey the romance between Percy and Monty by focusing on the fact that the two HAVE a relationship rather than the characters are two BOYS in a relationship. Romance is often difficult to write, but the descriptions and writings that Lee introduces to convey Monty and Percy’s multifaceted relationship make the two absolutely irresistible from the beginning of the novel to the very end. I absolutely cannot give Lee enough credit for her approach to the central relationship in the novel, feeling as though it demonstrated an equal combination of humour, heart and hesitation in the response from the authority figures in a time when homosexuality was not as well-received as it is today.

This novel was beautiful. Its scavenger hunt design, its alluring protagonist and witty writing are saving the young adult readers from a lack of flavour in their everyday reading habits.