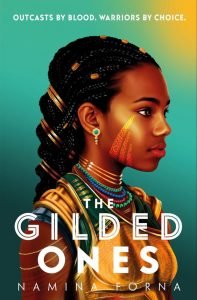 ‘The Gilded Ones’, an action-packed new fantasy series from début author Namina Forna, follows the story of a young female named Deka, who lives in the West-African-inspired society of Otera, in which women live to be of service to men, and their roles in everyday life are grounded in misogyny. For Deka, reaching a certain age within this society forces them to undertake a ritual in which women must spill their own blood in order to prove their worthiness to their people. However, when Deka is discovered to possess golden blood rather than red blood, she is instantly cast out of her home and sentenced to death. Torn from her family, friends and life she had always planned on living, Deka is reduced to a life of poverty and worthlessness, but when a mysterious female, referred to as ‘White Hands’ rescues Deka from her fate, Deka is indoctrinated into a society of female warriors, all who possess the unusual shade of blood, and are trained to protect the land of Otera from the deathshrieks, which are fearsome monsters with dangerous intentions. But as Deka trains among her comrades to protect the society that has shunned her, she will discover dangerous truths about her estranged and deceased mother, the adults she serves, and the true intentions of her role as a warrior.

This novel was impressive, but was held back by several aspects of writing and development that could have been edited in order to achieve the full effect of the subject matter. I will start by saying that the novel’s premise, while derivative of other dystopian novels in which a society places focus on a ritual that all children undertake, and the protagonist somehow deters from the rituals intention (think Tris Prior in Divergent, or the reaping in Suzanne Collins’s The Hunger Games), was able to have new life breathed into it by the atmosphere that is created by setting the novel in West Africa. I have not read many young adult fiction novels that not only managed to do this effectively, but manages to do so in a way that explores and comments on the cultures that are so central to the plot and characters. I understand that the author drew inspiration from her own first-hand experiences when constructing the narrative, and I can only applaud her for managing to embrace the harrowing experiences of African families and children, while also adding a deft layer of fictitious liberty for the inclusion of magic and battle. One of the hallmarks of debut authors is a lack of presentation of the settings and themes, even though their writing may be coherent and well-developed, but Forna in no way falls victim to this common error, and that is certainly something to be applauded.

With that being said, there were a few minor issues that raised red flags for me throughout the novel. Time and time again, I see authors include too much exposition and character back-story in a single moment, rather than properly develop these elements across the novel. I felt that, for the first thirty pages of the novel, Forna was simply overloading readers with a plethora of background information about how Deka’s society came to fruition, or how the social classes were constructed. While the middle section of the novel managed to clear up this overbearing description and subsequent sense of convolution, the final part of the novel simply had far too much development and revelation packed into too short of a time frame, and that damaged what could’ve been a solid end to a well-crafted narrative. I actually found that I constantly lost track of what I was reading, and couldn’t keep up with everything that was being conveyed about Deka and her past. This is a rookie mistake, and I hope that Forna can alter her delivery of such important character development so as to ensure that readers fully grasp and retain each individual aspect that is being revealed.