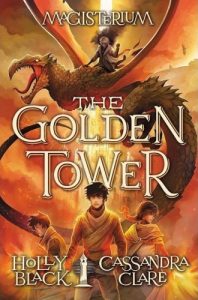 In the final novel from the Magisterium series by Cassandra Clare and Holly Black, Callum Hunt is faced with the task of destroying Alex Strike and the chaos that followed in the wake of the events of the penultimate novel The Silver Mask. Callum Hunt is now entering his Gold Year, the final year of his magical training at the Magisterium. With Aaron now closer to Callum than ever before, Callum and his friends take on the challenge on scavenging for elementals that will finally be able to bring Alex down from his heights as a Makar and wielder of chaos magic. With the stakes being higher than ever, Callum has to band together with friends old and new to save the magical world as he knows it from indefinite destruction.

This was an extremely bittersweet novel for me for a few reasons: I was sad to see the series come to an end, but also felt the novel hitting the same positive notes that the previous two had set. This novel, rightly so, lacked a lot of the playful and innocent fun that the first two novels seemed to have, and I felt as though without this added humour and heart, the series finale lost its footing quite a bit. However, this did not stop me from hanging on to each chapter as it came, but I feel as though the novel went in a direction that was not owing to the pace and structure set by the former four books.

As well as this, I lost all respect for Alex Strike in this novel. I had a very tenuous relationship with this good-turned-bad facade delivered by Alex, and this novel only painted him in a worse light. In this book, Alex almost seemed like an idiot, and a lot more dislikeable than any novel’s villain should be. Throughout the novels, we have been lead to believe that no-one should be overlooked for the role of villain–we have gone from Alastair to Rufus, from Anastasia to Call himself, but Alex has, by far, been my least favourite of all. Without a solid villain, any battle between good and evil will completely fall flat. I’m sorry to say this, but Magisterium certainly lacked depth in response to its weak villainous delivery. The ending was also rather rushed, and–at only 239 pages–there was no reason to hurry with the delivery. I understand that there may have been some time constraints or other problems affecting the course of the novel, but in order to have a proper send-off for a series’s final book, ending it well is CRUCIAL. The Golden Tower fell flat in this regard, too.

Even though this part of the series may have fallen a little flat in its resolutions, I have no problem with saying that I truly enjoyed reading it. I loved Callum, I was intrigued by the magical interworking systems, and I thought that the dialogue was a perfect blend of humorous and enthralling. The Golden Tower certainly does not round out the series perfectly, but the stellar performances from The Silver Mask and The Bronze Key leaves a positive place in middle-grade magical fiction.