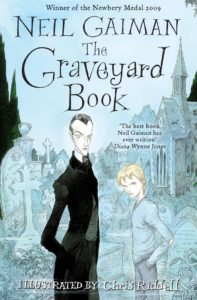 The Graveyard Book, published in 2008, is a work of Neil Gaiman’s that instantly appeals to readers of the macabre and strange. The novel follows Nobody ‘Bod’ Owens through his experiences of living with a cohort of ghouls and ghosts within a cemetery. The Graveyard Book chronicles his life throughout the graveyard and the places in its vicinity, and was a novel that succeeded Gaiman’s 2002 novel Coraline, which was adapted for television just a year after the release of The Graveyard Book.

I did not enjoy this book at all. One of the most central reasons for this was that the novel wasn’t actually a novel at all, but rather a collection of short stories that occurred with Nobody throughout his life. I don’t know whether I had set my expectations too high when I purchased the book, but all hopes and aspirations were crumbled by uninteresting characters, bland dialogue and boring plot development.

One of the main reasons I feel I didn’t enjoy this book is the fact that I had extremely high expectations for it. Coraline, the novel written by the same author, continues to be my favourite film and novel–if not actual thin–on the planet, and though I had delved into Gaiman’s adult novels (American Gods, The Ocean at the End of the Lane) I had never felt the need to explore his young adult/children books. I highly doubt that I will ever be doing this again after the impression this novel left on me.

I also feel as though my reasons for disliking this novel stem back to its failed attempt at setting inspirations. Graveyards have always been a point of interest for me–their ominous feel, their fearful history–but I feel as though The Graveyard Book completely missed an opportunity to really develop and give backstory to the graveyard that Bod found himself in. I was rather annoyed that Gaiman had not given us more information on the beginnings of the graveyard, which was something I thought he (Gaiman) could’ve played with.

All in all, this book was a disappointment, and while I will say that it will not hinder my complete love for his early work, Gaiman may find that I will not be giving this novel complete praise if he ever comes to read this review (wishful thinking.)