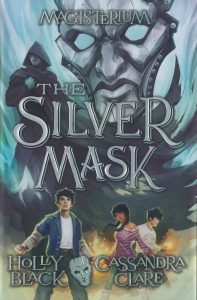 The penultimate novel from the world of the Magisterium series is set one year after the events of The Silver Mask. Callum Hunt has been framed and is now residing in prison. But, after being broken out, Callum is captured and detained on an island out in the sea, forced to continue his study on chaos magic. Unable to leave the island, and stranded with Jasper and Tamara, Callum is faced with an ultimatum–continue his study to bring the dead back to life, or face a war between the Magisterium and the island’s band of renegades.

I did not think that it was humanly possible for me to enjoy this series any more after finishing The Bronze Key a few days ago. However, this middle-grade novel series continues to both enthral and shock me with its revelations, twists and turns. Each of the novels has had a major focal point–whether it be magical training (book 1) or the identity of a malicious spy (book 3). This novel focused more on a prison-break element, with our three main protagonists trying their very best to escape from the clutches of their enemies. This book was orchestrated extremely well, adding in a combination of suspense that kept me on my toes throughout.

I often criticise teenage relationships in young adult/children’s books, especially when they seem to be arbitrary and contribute little to the plot (most notably in Harry Potter and the Half-Blood Prince, which masked its meagre plot with an unneeded dose of teenage hormones). However, the evolution of Tamara and Callum’s relationship was much more believable because of how the said relationship worked into the story. By adding a romantic flair to the novel, Callum was given something to tie himself over to the side of benevolence in the face of imminent danger and devious acts. I applaud Clare and Black for their writing of these scenes, as I felt that their relationship was properly executed over the course of the four novels. The love triangle between Aaron, Callum and Tamara is not a trope that I am unacquainted with, but–somehow–it worked well for the novel’s plot as a whole.

I also loved the turmoil that Callum seemed to be facing throughout the course of the novel. Too often in similar novels are we presented with characters who seem to have it all. Callum certainly does not have all of these classic traits, and this is able to personalise the rapport that is shared between readers and characters. Callum’s struggles ultimately were able to ground the novel in a much more real sense, something that very few novels have ever been able to fully achieve successfully.
All in all, I couldn’t be happier with this novel. Epic battle scenes met with the heartfelt relationship between characters cements The Silver Mask as a glimmering gem in the middle-grade fantasy crown.