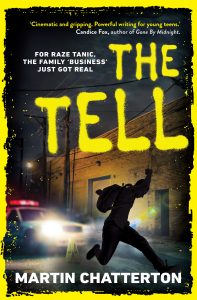 The absolutely electrifying Australian crime novel ‘The Tell’ by Martin Chatterton weaves a wickedly satisfying tale of Raze Tanic, an upper-class Sydney student whose family-run an illustrious crime ring in the heart of the Australian city. Raze has everything he could ever want, except the relationship with his father, who has been jailed in a maximum-security prison for his misdemeanours. When his father manages to escape, Raze is thrown into a whirlwind investigation to track him down, and foil his plans to cause damage to Sydney’s entirety. Along the way, he will come into contact with several of his father’s friends and enemies, all of whom have their own agendas and motives. With his close-knit friends, Tanic takes charge to avenge his family members, and battles with the dilemma of saving his family, or saving his home.

This novel was a pure delight. As a reader, I do enjoy reading crime novels quite a lot (‘The Girl on the Train, ‘Sharp Objects’ and ‘The Woman in the Window’, just to name a few), but it is a rare occurrence to find a crime novel that centres around a child as opposed to an adult. This deviation from the traditional narrator for this genre of the story was as refreshing as it was innovated, and I feel as though its simplistic writing style–which aligns with the mental age of the child–lent itself to the plot in a way that was masterful, to say the least. Raze is a thoroughly likeable character, and has dilemmas that demonstrate this. I felt that this novel aptly explored the dilemma of two deviating parties (in this case, protect family, or the rest of the city), and did so in a way that endears readers to the characters, a feat which some protagonists fail to achieve.

I feel as though this novel will appeal well to Australian audiences. The setting of the novel in Sydney, NSW made me feel a sense of closeness to the narrative because of how familiar I was with the sights and setting. However, I do feel as though the novel’s effect could be lost in translation for international audiences. That being said, I fully commend Chatterton for grounding his novel within the Australian idealisms that Australian literature has adopted over the course of our history. While the story did use colloquialisms and descriptions which are fundamentally Australian, I feel as though the novel would act as a great bridging for younger audiences to be introduced to the medium that is crime fiction because of its centralized adjacency to our everyday lives.

This novel was wonderful, and blended humour with hard-packed action and adventure, while also tapping into much darker themes in increasing severity. With its self-aware writing for the correct target audience, Chatterton’s novel will, hopefully, become a staple in Australian children’s crime.